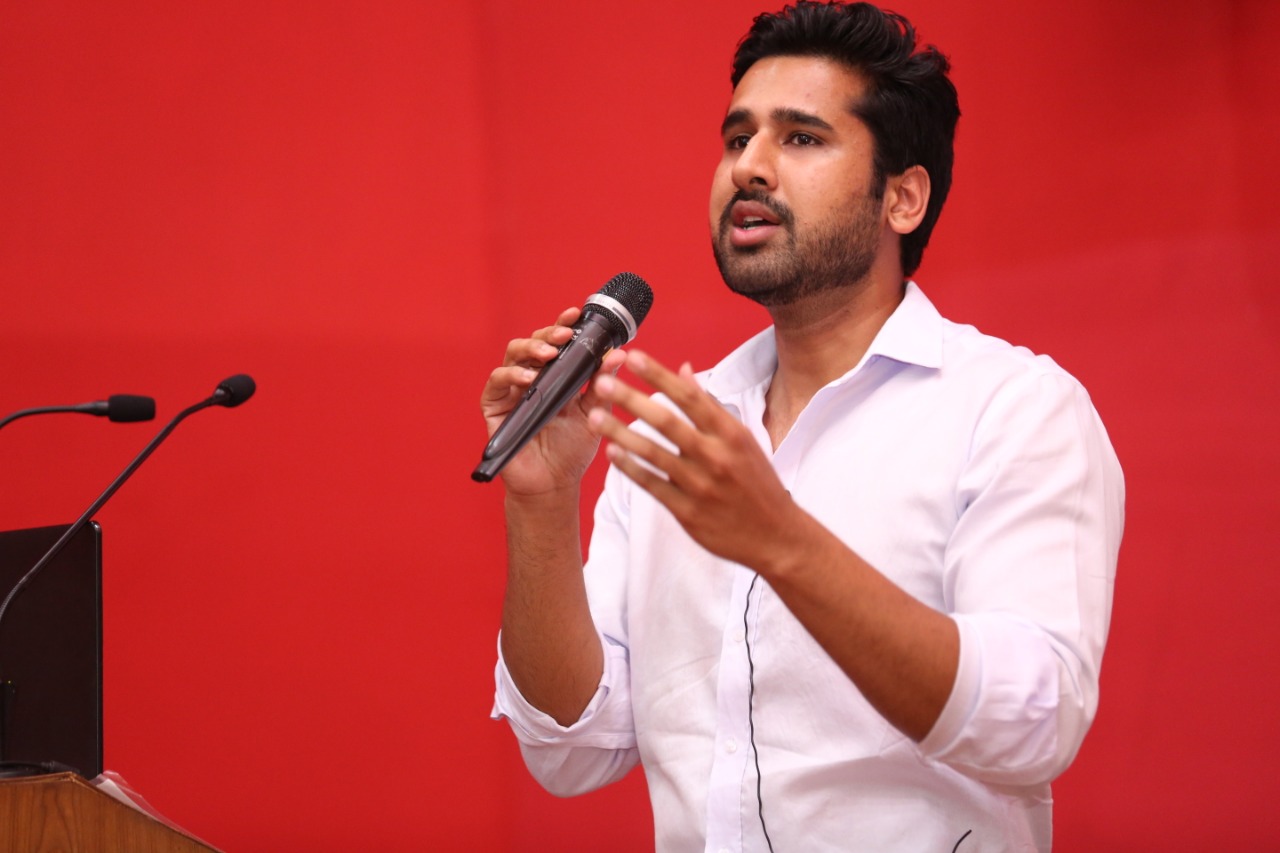 What do you do when you experience every hue of happiness at a truly global university? You spread that happiness across the globe! JGU alumnus Ajay Singh Rathore is doing just that with his entertainment business, ‘Happy Globe’. It promotes healthy living and happiness through recreational activities such as music, dance, comedy, artist nights, ice-breaking sessions, happiness workshops and social innovations.His other ventures include Wedding Business ‘We for Weddings’ & an educational setup National Event School which promotes 360 degree edutainment for media aspirants. Rathore’s infectious energy drives this happiness engine around the world, just like it fueled a lively campus during his time at JGU.

He was always a cool and confident youngster. Fearless on stage, a passionate performer, an energetic sportsperson—Rathore had all the makings of an entertainment entrepreneur, even in his early childhood and teenage years. Interestingly, he never imagined making a living doing what he already loved. Instead, Rathore decided to sign up for a law degree at Jindal Global Law School. He began his journey at JGLS with the idea that his strengths would give him a natural edge as a lawyer, but law school ended up teaching him a lot more than law. It became a place for Rathore to hone his inherent talents and own his dreams, whatever they may be. In his words, JGU taught him leadership, fearlessness & the communication skills.

In a young university with many avenues to explore, Ajay was ever-ready to champion the way up and onward. High energy, enthusiasm and willingness to participate in all sporting and cultural activities on campus made him a beloved, popular face in the JGU family. Under his leadership, the basketball team of JGU became a huge hit, and the volleyball team won eight gold medals in major tournaments across the country. The sporting hero also had a poetic side to him and his shayari caught many admirers. With a flair for performing arts and organising events (and a soft spot for Bollywood dance!), Ajay seized every opportunity to get involved, learn and grow.

Through the five years of intense legal training that keeps students on their toes, Ajay found he had the freedom and support to chase anything he set his heart on. The law graduate chose to go off the beaten track, focusing on his leadership skills and passion for entertainment. His days as part of the organising committee for Biswamil, the annual cultural fest of JGU in 2015 and Magnus, the annual sports fest in the subsequent year set the foundation. “I learned a lot about event management through playing an active role in various extra and co-curricular activities on campus,” he admits. It was those invaluable experiences and unexpected opportunities that came along with his law degree that gave him confidence to start his own venture.

The seeds of his company, Happy Globe were sown in the fourth year of law school. For Ajay, it became clear that JGLS was not only an incubator for lawyers-in-the-making, but a nurturing environment for students to find and harness their unique interests and succeed in every sphere of life. “The planet needs more successful people; successful as peacemakers, healers, restorers, storytellers, and lovers of every kind. It needs people of moral courage willing to bridge gaps of various kinds within the community to make the world habitable and humane,” says Ajay.

After three years of putting in the hard yards, he has now been able to expand the business across cities including Chandigarh, Agra, Udaipur, Delhi, Noida, Gurgaon, and Jaipur. The happiness engine is rolling at a fast pace, spreading joy all around. In fact, it has now become the fastest-growing Entertainment organisation in India with excellence in the field of Event, Artist Management, Weddings, PR, Marketing, Digital and Social Service. They have organised events in over 80 colleges including IITs and IIMs and influenced over 3,00,000 students through a ‘global happiness movement’. The philanthropist in Ajay came to the fore when Happy Globe Foundation decided to sponsor the education of 4,00,000 underprivileged kids in collaboration with Teach for India Programme.

Ajay has a simple and positive mantra that he shares with students as a parting shot, “Each one of you has visible and invisible talent. Discover it and follow your dream with guts so that you can make it to the end with a smile on your face. That’s something that matters in the end.”