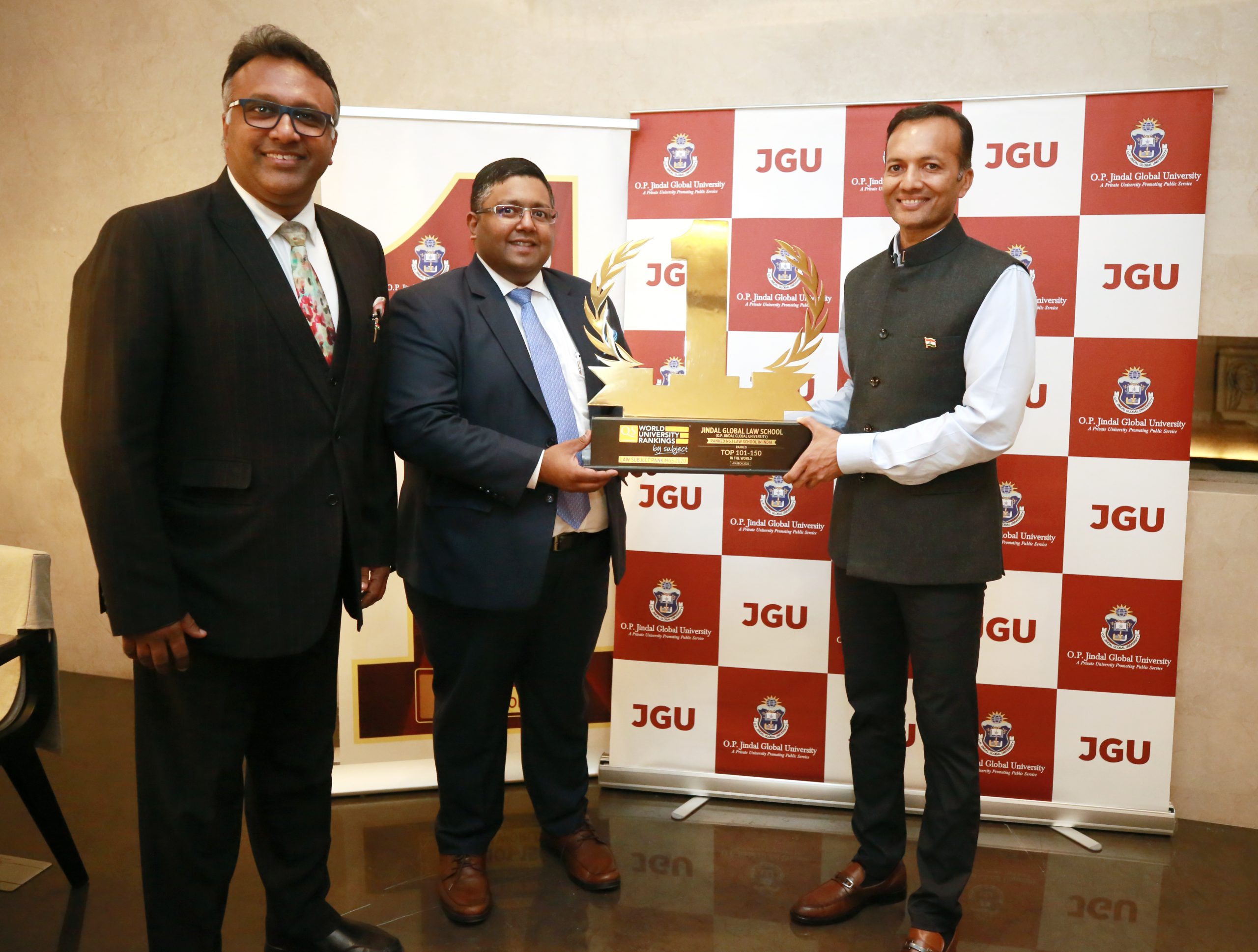 London/New Delhi, 4 March 2020: The Jindal Global Law School (JGLS) has made history by breaking into the prestigious QS World University Subject Rankings 2020 in Law for the first time. It has earned this global recognition in a short span of barely one decade.

The QS World University Subject Rankings 2020 has just been released from London by Quacquarelli Symonds. Of the only two law schools from India that have entered law subject rankings, JGLS has secured the top number one position.

Mr. Ashwin Fernandes, Regional Director, QS Quacquarelli Symonds, “I am delighted that for the very first time, in our QS World University Rankings by Subject in Law, we not only have a young institution – but also one that is top in India. O.P. Jindal Global University has been ranked in the 101-150 range in Law, while being ranked first in India, having veteran National Law School of India University, Bengaluru just behind in the 151-200 range, having the second rank in India.” QS Subject Ranking in Law measures the global relevance of institutions specifically in the area of research in law along with combining reputation from the academic community and employers. The methodology is subject sensitive and looks specifically at universities or institutions which have a strong focus on law. Hence only the best 300 law schools globally make it to the list”, said Mr Fernandes.

Reacting to this significant achievement, Mr. Naveen Jindal, the benefactor and founding Chancellor of O.P. Jindal Global University observed, “This is truly a red letter day in the history of JGU and JGLS. The recognition of JGLS as the Number 1 law school in India and among the top 150 in the world by the reputed QS World University Rankings 2020 by subject is a historic achievement. My congratulations to the Vice Chancellor, faculty members, students and staff of JGU whose untiring efforts over a decade have resulted in this amazing recognition. We established O.P. Jindal Global University (JGU) as a tribute to my father Shri O.P. Jindal, who deeply believed in the transformative power of education and its impact on nation-building. Our vision was to establish a world-class university in India that will fulfill the aspirations of young people of India and the world. The fact that JGU and JGLS have achieved a stellar reputation and global recognition in a decade give us immense satisfaction. But more importantly, it reinforces the power of philanthropy and its role in institution building and nation building.”

Expressing his profound excitement and happiness on this recognition, Professor Raj Kumar, Founding Vice-Chancellor, JGU said, “O.P. Jindal Global University was born out of a vision that India deserves to have universities that can provide world-class education, benchmarking with the best in the world in terms of faculty, education, research, collaborations, and infrastructure. JGU is on a relentless pursuit of promoting excellence in institution building. It is an extraordinary and unprecedented “institutional moment” for JGU to witness history as its first school, the Jindal Global Law School, is ranked number 1 in India and among the top 101-150 in the world. This achievement has been possible because of the visionary leadership and generosity of our founder and philanthropist, Mr. Naveen Jindal, the passionate commitment and dedication of our faculty and staff, the trust and faith reposed on us by our students and their parents and the encouragement and support extended to us by the government agencies and regulatory bodies all these years. All the schools of JGU are on this pathway to achieve global recognition and institutional eminence.”

Welcoming this significant development, Prof. Y.S.R. Murthy, Registrar of JGU said, “JGLS graduates are making their mark among various employers including law firms, corporations, academia, litigation, research institutions, civil society organisations, NGOs and many others. They are able to charter their own destinies empowered by the quality education and exposure that they received at JGU. I wish to thank all academic partners in India and abroad for their collaborations with JGLS and for undertaking a series of mutually-beneficial academic activities. This is a historic recognition for JGU and Jindal Global Law School. I congratulate all members of the JGU Community. This recognition will spur us to work harder and aim higher.”

Prof. Ashish Bharadwaj and Prof. Arjya Majumdar who direct the Office of Ranking, Benchmarking and Institutional Transformation (ORBIT) in JGU said, ‘Having been recognised as the number one law school in India, JGLS is well-positioned to make a significant research-driven contribution towards building a just, inclusive and democratic society.’

To produce the QS World University Rankings by subject area for this year, QS analysed over 22 million papers, producing close to 200 million citations. 1,368 institutions have been ranked across 48 subjects in 5 broad categories across 159 locations, which reflects the scale behind this internationally benchmarked undertaking to produce these subject rankings. Across all subjects, 165 institutions were considered from India, 441 from the United States, 502 from UK, Germany & France combined, and 360 from China, Japan and South Korea combined for this QS Rankings 2020 by subject area.

JGU scored in 7 subjects within two broad areas of social science & management and arts & humanities. These 7 subject areas include Economics, Law, Politics, Social Policy, Sociology, Art & Design and Performing Arts. Despite severe national and international competition, JGLS scored very high in the subject area of law. It is important to note that overall 894 law schools were considered to be eligible by QS in these rankings, out of which only300 were ranked. JGU is in the top 150 of the world and number 1 in India.