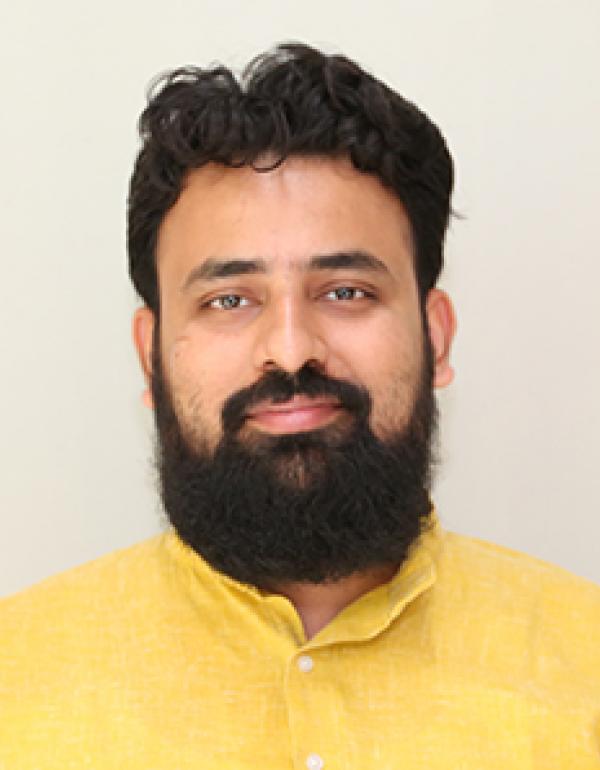 Abu Talha Farooqi did his B. Arch (2006-11) and M. Arch Healthcare Architecture (2013-15) from Jamia Millia Islamia. He is a registered architect with Council of Architecture (COA) – India since 2011. Besides, he is a BEE Certified Master Trainer of the Energy Conservation Building Code (ECBC) of India.
Since 2011, he has worked on architectural projects of different scale and typology. His involvement in those projects has been comprehensive and overarching, at times even covering the execution part; something which has helped him in holistically understanding the technical and pragmatic nuances of building projects.

He has headed the humanities track at SSAA focused on developing critical thinking skills, reading and academic writing skills. He has served as the head of third year design studio - conceiving the design brief, translating the brief into pedagogical studio lesson plans, etching out studio process, list of deliverables and assessment rubrics as well as maintaining coordination and parity across sections. As the head of the sustainability team of SSAA, he led the Academic Curriculum Integration Project (ACIP) in collaboration with the organisation - CBalance fairconditioning.org; a pilot project aimed at integrating sustainable design into all the three principal tracks – humanities, technical sciences and studio.
He has also designed and taught courses at masters level in Healthcare Architecture at Jamia Millia Islamia. As an ECBC Master Trainer, he has trained numerous government and state agency representatives across India towards understanding and implementing the ECBC in India.

He has a deep interest for interdisciplinary researches and intersections of architecture with literature, poetry, society and cinema. He has conceptualized and taught elective courses on the intersections of architecture with poetry, cinema and cultural production. As an academician, he has strong beliefs in reinventing education models to equip the architecture student in responding to built environment issues and he constantly sensitizes his students about their potential and responsibility as designers towards addressing these issues and concerns.

ACSA 107 Annual Meeting Proceedings - Examining "Order in Disorder";: A Speculation into Space, Time & The Human Subject, in context of Urban Villages in Delhi.

2019  :  Expert Speaker on the need of ECBC and Building Physics in the Indian Context at Two Day ECBC Awareness Program for architects and engineers organised by ECBC Himachal Pradesh Cell at Hamirpur on 29th May 2019.

Expert Speaker on ECBC - compliance, building envelope and building physics for the Indian Context at One Day  ECBC Awareness Program for architects and engineers organised by ECBC Punjab Cell at Ludhiana, Punjab on 02 May 2019.

2018  :   Expert Speaker on Orientation to ECBC & its need in the Indian Context at One Day ECBC Awareness Program for architects and engineers organised by ECBC Punjab Cell at Baba Banda Singh Bahadur Engineering College, Fatehgarh Sahib, Punjab on 20th Dec 2018.

Paper presentation titled ‘Indo-Iranian Way of Thinking as a Discourse: Ideas in Literature, Cinema and Architecture’ at International Conference on Art and Architectural Traditions of India and Iran: Commonality and Diversity held on 07 December 2018, organized by the India-Arab Cultural Centre, Jamia Millia Islamia, in collaboration with IGNCA and the Iran Culture House, New Delhi.

2017    Expert Speaker on Energy Efficiency, Climate Justice and the scope of ECBC in architectural education at ECBC at Two Day ToT Workshop for architects and architecture academia organised by ECBC Cell Rajasthan in Jaipur on 7th, 8th December 2017.

Participation in Call for Ideas: History and Conservation: Voices from Small and Medium Towns of India with the Idea note titled Cultural Capitalism as the force for connecting History, Conservation & Development of small & medium towns in the present day context at Sushant School of Art & Architecture on 5th & 6th December 2017.

Expert Speaker on Energy Efficiency, scope of ECBC, code and compliance at Two Day ToT Workshop for PWD Engineers and other stakeholders organised by ECBC Cell Rajasthan in Jaipur on 22nd, 23rd November 2017.