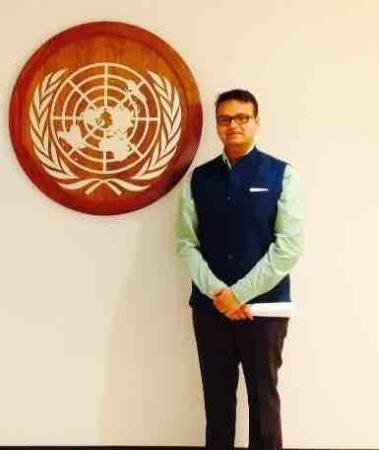 Pratyush Sharma’s dissertation topic for the Master’s programme at O.P. Jindal Global University (JGU) was ‘India’s Foreign Relations: Connecting the Glorious Past with the Challenging Present’. Currently pursuing a Ph.D. at the United Nations-mandated University for Peace (UPEACE) in Costa Rica, he represents that past and present of the nation in many ways. Having represented India at numerous prestigious events around the world, he is not new to being an ambassador for his country. We look at his journey where he has overcome challenges and achieved success in a short span of time.

After his engineering degree, Pratyush followed his heart by pursuing the MA (Diplomacy, Law, and Business) programme from the Jindal School of International Affairs (JSIA). He says he continues to rely on that interdisciplinary background in International Relations, International Law, and International Economics in his career. ‘My time at JGU also helped me develop the way I viewed the world,’ he says, looking back. It also gave him the opportunity to intern at the Research and Information System for Developing Countries (RIS), an autonomous New Delhi based think-tank under the Ministry of External Affairs, Government of India.

As a part of the internship, Pratyush presented a report on India-Bhutan Development Cooperation Initiatives. That much-appreciated report acted as the stepping-stone into the world of research that has taken him places. It’s not surprising that one of his favourite spots at JGU was the library. ‘It is a true gem that outshines many libraries I have seen abroad,’ he shares with a smile on his face. It was also not surprising that he made his professional foray as a researcher with RIS, where he coordinated courses and events on South-South Cooperation and International Development Cooperation.

The role with RIS marked his entry into the international arena through several high profile events. Pratyush presented India’s perspective in a conference organized by the United Nations Office for South-South Cooperation in Prague. He was also a part of the Indian academic delegation to the 3rd International Conference on Financing for Development held in Addis Ababa, the 70th Session of UN General Assembly, and the 2nd High-Level UN Conference on South-South Cooperation held in Buenos Aires. These international conferences cemented his position as an emerging voice in global relations.

In his prolific career, Pratyush has received prestigious fellowships that enabled him to participate in the Managing Global Governance programme at the German Development Institute, and the International Futures programme at the German Federal Foreign Office in Germany. Pratyush has always stayed true to his passion for research and has many renowned publications under his belt. He also provided research inputs for a weekly television show called ‘Global Review’ on Lok Sabha TV. As he closes in on his Ph.D. from UPEACE, he is poised to write a new chapter in his career journey.