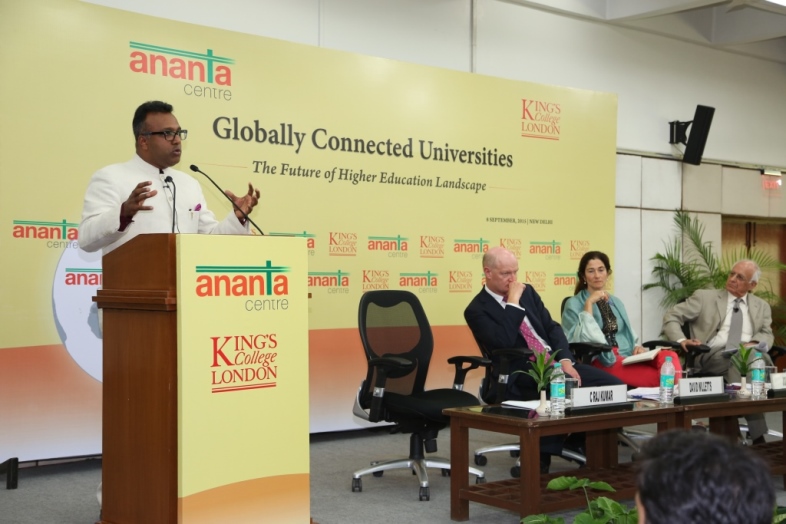 Kings College London and the Ananta Centre organsied an informative and interactive session on “Globally Connected Universities – The Future of Higher Education landscape” where an eminent panel comprising of  Prof. C Raj Kumar, Vice Chancellor, O.P. Jindal Global University, Dr. Joanna Newman, Vice Principal International, Kings College London and Rt Hon David Willets, Former Minister of Science and Universities at UK and Former Member of Parliament deliberated on shifts in the influence and structure of  higher education globally, innovative models for futuristic universities and what will a globally connected university means for the country and the global community.

Prof. Edward Byrne, Principal King’s College London thanked the Ananta Centre for organising the session and said, “this session is terribly important because all graduates should have a global perspective which may or may not involve study in more than one country, the global perspective is particularly important from the research and innovation angle and a greater degree of collaboration between higher education institutions in India and UK is needed.”

Prof. C Raj Kumar started by defining what a global university is and explained that the O.P. Jindal Global University has the word global as a part of its name because, “from the very beginning there was an attempt to define the vision to include a global curriculum, global faculty regime, global research agenda, global course structure all of this to promote a global vision of institutional excellence and capacity building.” He said today the broad challenge for global universities lies in, “achieving and maintaining a degree of quality, quantity, inclusivity and accessibility all together and how we simultaneously address all these challenges.”

Prof. Kumar spoke of the challenges faced by global universities in developing countries, “it is a challenge to balance the expectations and aspirations of institutions to be globally connected and globally oriented while fulfilling the desires and aspirations of the local population. In India the gross enrollment ratio is less than 20 % and the aspiration is to increase this to 30-40 % in the next decade or so.”

Prof. Kumar broadly defined five challenges and opportunities of how to connect universities across different geographic areas, he said, “the first challenge is democratization of higher education, the second barrier is regulation and governance where most countries are struggling to create an enabling environments, the third is the issue of technology and access, the fourth aspect that will shape the future will be benchmarking and rankings, and the fifth is research and knowledge creation.”

Professor Kumar emphasized on the outstanding contribution of the President of India in galvanizing social consciousness for rankings and benchmarking of universities. He said, “The President of India by virtue of his role as the visitor of 114 institutions that include the central universities, IITs and other institutions of national importance has played a very significant role in promoting excellence in higher education by emphasizing on research, knowledge creation and publications. This is a remarkable initiative from the President of India in highlighting the importance of global benchmarking systems to evaluate the contribution of Indian universities.”

Describing the Indian perspective at the session Prof. C. Raj Kumar, Vice Chancellor, O.P. Jindal Global University spoke on the demographic advantage that India has, he said, “We have 800 million people of less than 35 years of age in our country seeking education and empowerment and these very people will be key in transforming the future of not only India but the world at large.”

Vice Chancellor Kumar said that there is a need for India to learn from other countries and called for de-regulation as the need of the hour, he said, “There are 20 different regulators of higher education at the state and central level in India and we even have courts which have given numerous judgements in conflict with other courts and even the regulatory bodies, there is a possibility of looking at experiences in the BRICS countries, India has a lot to learn for institution building and there is a need for emphasizing Making of India rather than make in India.”

Dr. Joanna Newman, Vice Principal International, Kings College London while speaking on the relevance of the topic said, “We live in a globally connected world, there are a lot of changes that technology is bringing about in higher education. As the need for higher education grows exponentially and as countries invest increasingly in developing higher education infrastructure, the big question is how can we educate the considerable number of people who need education? The answer lies in mobility.”

Talking on the recent trends in mobility of students she highlighted that even though UK still has the second largest number of international students the trends are altering, she observed, “since 2009 the number of students coming to UK for higher studies has dropped, it has to do with costs as well as technology. Students now have a choice of studying in their own or neighboring countries.”

Mr. David Willets, Former Minister of Science and Universities at UK and Former Member of Parliament spoke about creating think tanks within the frame work of universities similar to the one in Kings College. He said, “There is an endless process of innovation that is needed in higher education, we need to see our universities at the heart of national and global debates and we have to constantly look for new ways of doing this. If we make it too hard to create new universities, people desperate for higher education will manage to find ways, however these alternate methods cannot be expected to provide certifications that are recognized globally.”

The session was attended by Mr. Sunil Khilnani, Avantha Professor and Director, King’s India Institute. It was also attended by Vice chancellors from several universities, IAS and IFS officers, academics and representatives from several think tanks and research organisations.