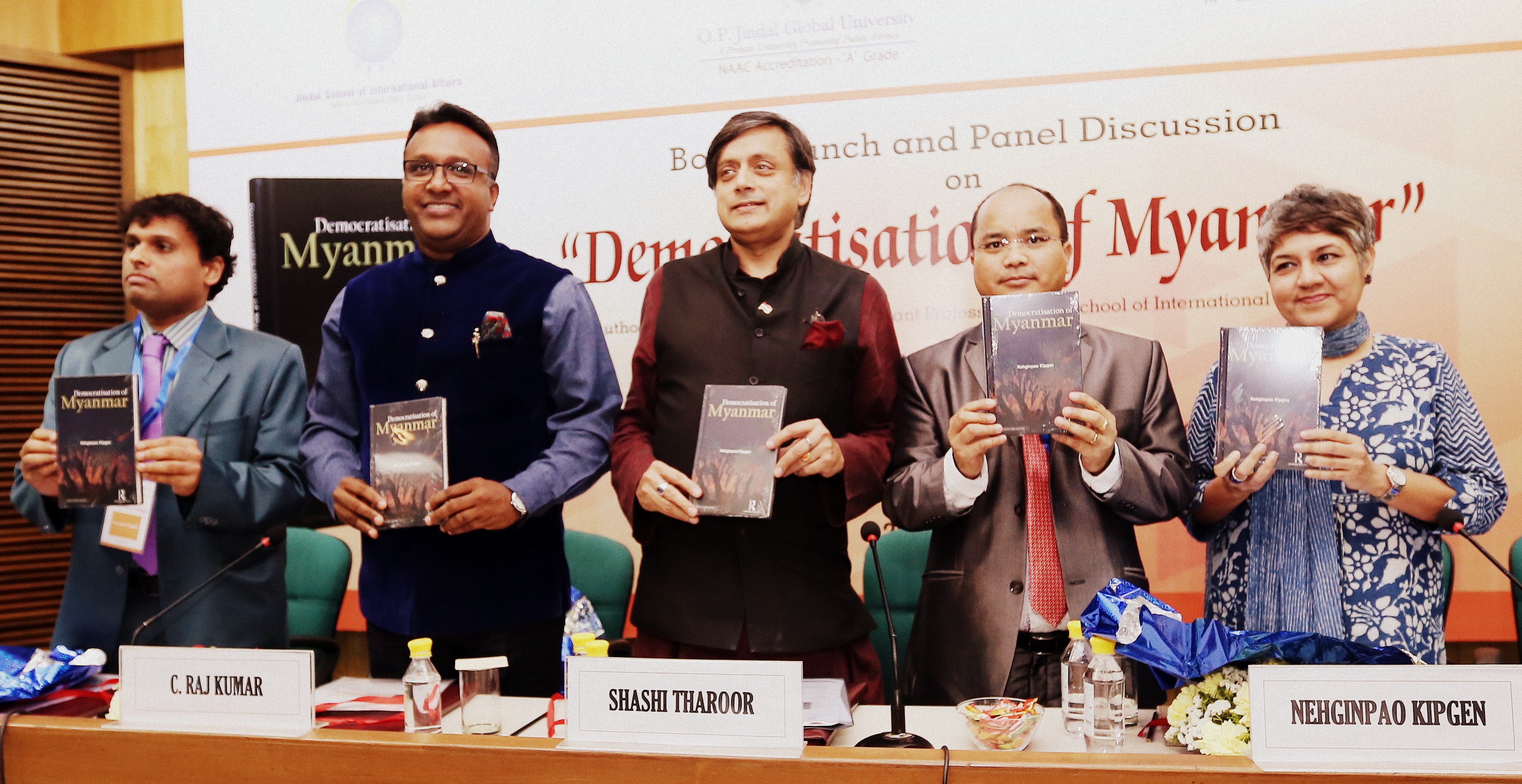 New Delhi, March 28, 2016: Congress leader Shashi Tharoor today unveiled ‘Democratisation of Myanmar’, a new book authored by a Southeast Asian Studies scholar Dr. Nehginpao Kipgen that pieces together the historical and political factors that have led to a successful democratic transition in Myanmar after nearly five decades of military rule.

Dr. Shashi Tharoor who graced the occasion as Chief Guest said the book has touched important ground and will help readers understand how Myanmar may evolve post the ending of the military rule. Himself an acclaimed author with a rich ensemble of books to his credit, he congratulated Dr Kipgen for writing on a subject on which not much academic material is available as of now.

He said the democratic process now needs to be legitimized and regularized in Myanmar. Referring to the plight of the Rohingya Muslims, Dr Tharoor said over 810,000 people were still stateless in Myanmar and the principles of democracy will ring hollow if they are not extended to the most vulnerable and minority sections of the country. He also said that the people of Myanmar had voted overwhelmingly for Aung San Suu Kyi but the inability of the NLD leader to hold the highest office is unfortunate and does not offer true representation of people’s will.

H.E. Mr. Rizali Wilmar Indrakesuma, Ambassador of the Republic of Indonesia to India said that Myanmar is in early stages of change, and it is yet to be seen what can be expected from the democratic transition. He cautioned that a number of aspects need to be addressed before Myanmar can be hailed as a complete democracy.

Professor (Dr.) C Raj Kumar, Founding Vice Chancellor O.P. Jindal Global University congratulated Professor Kipgen for the book and said that the book is a reflection of the ideas of knowledge creation and research on which the university has been established.

Announcing 50 % scholarships for Burmese, Kuki & Naga communities at the university Professor Kumar said that the university would like to invest in the future of these communities. He noted that and there is nothing more democratizing than institutions contributing to knowledge sharing.

Published by Routledge (Taylor & Francis), the book comes at a time when the process of government formation is on, with observers keen to follow the institutionalization of democracy in the country where military still holds significant influence and power.

“It is a very interesting time in Myanmar where the country’s first elected government is taking shape. There have been a lot of questions among observers and analysts regarding the transition in the country: Was the election free and fair? Will the transition last? Is the military serious towards bringing about a democratic change? While some questions were answered with the landslide victory of Nobel Laureate Aung San Suu Kyi’s party, other questions will be answered only with time. In my book, I have tried to look at the process and examine how multiple sections of society including civil society, reformers, activists, the democratic opposition groups, particularly the NLD, and the military succeeded in striking a chord and working together in unison to bring about this historic change. Given his rich experience as an international bureaucrat, I am highly grateful to Dr. Shashi Tharoor for enriching us with his presence and views on the subject,” said Dr. Nehginpao Kipgen.

The topical book studies the process of democratic transition in Myanmar. It outlines the factors that contributed to the political transition in the country and the circumstances in which the transition from military rule of nearly five decades to democracy took place. The author shows how political groups – especially Aung San Suu Kyi’s National League for Democracy (NLD) – and the military that had been hostile to the idea and practice of democracy came to work together, paving the way for the political change after protracted struggle. In doing so, the volume examines the role of civil society, elites, external agencies, and institutions in the process of democratic change.

Dr. Kipgen is a Political Scientist whose concentration is in Comparative Politics and International Relations. His general research interests include democratization, democratic transition, global/world politics, human rights, ethnic conflict, identity politics, and foreign policy. His academic research focuses on South Asia and Southeast Asia, with specialization on Burma/Myanmar. Since 2013, Dr. Kipgen has served as a “country expert” on Myanmar for Varieties of Democracy (V-Dem), a collaborative academic research project of the Department of Political Science, University of Gothenburg (Sweden), and the Kellogg Institute, University of Notre Dame (USA).