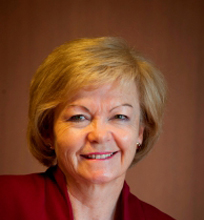 Professor Jane den Hollander has been Vice-Chancellor and President of Deakin University since July, 2010. At Deakin, Professor den Hollander introduced LIVE the future, an aspiration for Deakin to drive the digital frontier in higher education, harnessing the power, opportunity and reach of new and emerging technologies in all that it does.

Professor den Hollander holds a BSc (Honours) First Class in Zoology and a Master of Science degree from Wits University, Johannesburg. Her PhD is from the University of Wales, Cardiff.

Professor den Hollander is currently a board member of Universities Australia, Education Australia Limited and UniSuper Limited. She is Deputy Chair and Trustee of the Geelong Performing Arts Council and Chair of Skilling the Bay, an organisation focussed on ensuring the skills and jobs of the future in a transitional economy.

Prior to taking up her appointment as Vice-Chancellor of Deakin University,