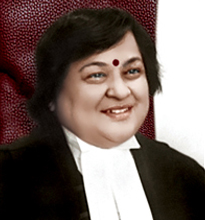 Justice Gita Mittal is a Judge of the Delhi High Court. She is an alumna of the Lady Irwin Higher Secondary School, Lady Shri Ram College for Women and the Campus Law Centre, Delhi University. She was originally appointed as an Additional Judge of Delhi High Court on 16 July 2004.

Prior to her appointment as Additional Judge, she had an illustrious legal practice in all courts and other judicial forums since 1981. Justice Mittal was confirmed as a permanent judge on the 20th of February, 2006.

As a judge, she has presided over several jurisdictions including heading a Division Bench hearing criminal appeals involving life and death sentence references; matters of the Armed Forces; Cooperative Societies; Criminal Contempt References; Criminal Appeals; Death References; Company Appeals; Writ Petitions and Letters Patent Appeals relating to the Armed Forces. She currently presides over a Division Bench hearing writ petitions arising out of orders of the Central Administrative Tribunal and other service matters.

Justice Mittal is presently chairing the court committees on the Delhi High Court’s Mediation and Conciliation Centre as well as the committee monitoring the Implementation of Judicial Guidelines for Dealing with Cases of Sexual Offences and Child Witnesses. She has spearheaded the Vulnerable Witness Court Project in the trial courts in Delhi leading to the first such court room in India being inaugurated on 16th September, 2012 and the second on 11th September, 2013.

She has also served on the COFEPOSA Advisory Board, under the Conservation of Foreign Exchange & Prevention of Smuggling Act, 1974; and the committee responsible for assessing the performance of judicial officers for their recommendation for elevation as Judge of the Delhi High Court. She was appointed as a single judge Tribunal under the Unlawful Activities (Prevention) Act, 1967 in February, 2008 to examine the Government ban on activities of the Students of Islamic Movement in India (SIMI).

Justice Mittal has been invited to contribute to national and international discussions at various forums and to present papers on topics including those relating to access to justice for the disadvantaged; gender issues; protection of human rights; impact of incarceration on women; corporate social responsibility; death penalty; impact of religion, culture, tradition on judging; corporate laws; procedure and intellectual property litigation and environmental laws and issues.