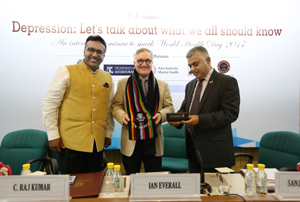 Professor Ian Everall, Professor Chee Ng, Dr. Julia Fraser, University of Melbourne on “'Depression: Let's Talk about what we all Should Know”

On 6 April 2017, on the eve of World Health Day, Jindal Institute of Behavioural Sciences in collaboration with the Centre for India Australia Studies and the University of Melbourne organised a seminar on “'Depression: Let's Talk about what we all Should Know” at India Habitat Centre in New Delhi. This seminar that has brought together psychiatrists, clinical psychologists, counselling therapists and academics from India and Australia who are renowned experts in the mental health sector.

During the seminar, it was noted that in the past mental health often took a backseat to physical health. Despite the fact that health has been defined to include physical, mental and social aspects (WHO, 1948), the perceived impact of mental health issues nevertheless remains grossly underestimated. Among the common mental health disorders, depression has emerged as the leading cause of disability with more than 300 million people affected by it worldwide (WHO, 2017). The most severe outcome of depression is suicide, which is also one of the leading cause of death in 15-29 year olds (WHO, 2017). A major contributor to the global burden of disease (WHO, 2017), depression is a serious health concern and a global crisis in the current scenario. Depression is thus, not only linked to reduced functioning of an individual, but also the society at large. In 2014, it was estimated that 45% of the world's population lived in a country where there was less than one psychiatrist to serve 100,000 people (WHO, 2015). Furthermore, the economic 'burden' of ineffective treatment of anxiety disorders and depression is $1 trillion per year (Frej, 2016). These staggering numbers are enough to aver that depression is a global health concern that requires immediate and sustained efforts. As a part of a movement to address this issue, WHO has called for worldwide action and has announced depression as the theme for World Health Day. The jointly organised seminar on Depression was well-attended by members of the academic and medical community and a productive discussion took place between all those involved.