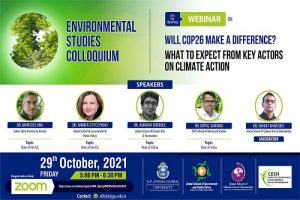 The Centre for Environment, Sustainability and Human Development (CESH) of the Jindal School of Liberal Arts and Humanities (JSLH), in collaboration with the Jindal School of Government and Public Policy (JSGP), organised a virtual panel discussion on October 29 on the prospects of climate action at the Conference of Parties climate summit held in November in Glasgow.

The panel discussion was moderated by Dr. Abhijit Banerjee, Professor of Environmental Studies at JSLH, and featured national and international experts focusing on what to expect from four key actors – the US, the EU, China and India – who together account for the majority of global emissions. The main focus of the discussion was the political and economic constraints facing these actors that may influence their respective climate commitments.

Dr. Marcos Luna, Professor of Geography and Sustainability, Salem State University, Boston, pointed out that extreme political polarisation between the Democratic and Republican parties has made climate policy an intensely partisan issue in the US. In addition, a successful disinformation campaign driven by fossil fuel interests and further amplified by social media, has misled much of the public about climate change. The Biden administration may want strong climate action, but Presidential powers are limited, and due to constitutional quirks, Republicans, who currently oppose climate action, will wield sufficient power in Congress to block any progress, regardless of what any President may promise the international community.

Dr. Annika Bose Styczynski, Associate Professor at JSGP, noted that the EU has already been quite progressive in reducing emissions in recent years, but much more ambitious policies are needed to meet carbon neutrality goals. In part due to the dramatic rise in recent climate disasters, public support and political will for increased action have been building. Progress achieved in the power generation sector needs to be replicated in other more challenging sectors, such as transportation. However, divisions remain among EU members, with highly coal dependent countries like Poland not keen on a rapid energy transition.

Dr. Avinash Godbole, Associate Professor of International Relations at JSLH, pointed out that while China has become a world leader in clean energy, at the same time it is rapidly expanding coal power to fuel its rapid economic growth. In response to international pressure, China has recently announced a net-zero goal by 2060, though critics are unconvinced due to the lack of any detailed plan. China sees “reciprocity” as key to its climate commitments, but current geopolitical tensions and human rights controversies have clouded US-China relations and prospects for international cooperation remain unconducive.

Dr. Gopal Sarangi, Assistant Professor at the TERI School of Advanced Studies, noted that India has stuck to its stance that, as a developing country, it must prioritise poverty reduction and development, and has so far refused to adopt any net-zero emissions target. India claims that it is on track to meet climate pledges made in Paris, especially on clean energy, but critics label these pledges as unambitious. In addition to high coal dependence overall, regional imbalance further complicates the situation in India, with the eastern mining belt heavily dependent on coal jobs and revenue. Without addressing such difficult challenges, any energy transition plan will remain unworkable.

In addition to the JGU community, the online discussion was attended by students from various other universities, such as JNU, TISS, Azim Premji University, IIM, Krea University, Christ University, Asian College of Journalism, Gujarat University, etc., as well as representatives from civil society and media organisations. The key takeaway message from the event was that prospects for rapid action on climate change are not immediately hopeful due to a variety of constraints. However, further enhancing public awareness and engagement, especially among the younger generation, is critical to gradually moving climate policy in the necessary direction.