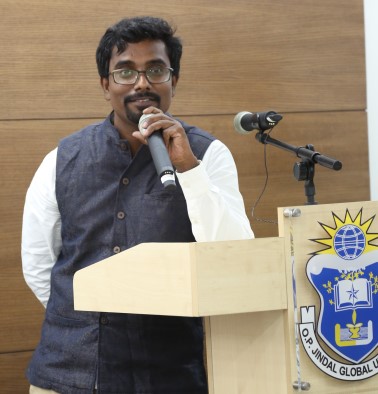 She was a small-town girl from California, who took on a major corporate giant over contamination of drinking water in her neighborhood. It was her courage that led to one of the most talked-about verdicts in the history of environmental activism. Erin Brockovich went on to become a global phenomenon with a blockbuster Hollywood movie based on her life. Close to home, a similar environmental crisis drove Srikanth Geedikanti to look beyond his promising IT career and delve deep into the world of public policy. The O.P. Jindal Global University (JGU) alumnus went on to establish Social Post Professional Services, an NGO focused on social policy formulation and implementation. He is also a consultant with the Indian National Congress. We learn more from the engineer, activist, policy-driver, and change-maker.

Srikanth grew up in a small town in Andhra Pradesh in a family that was deeply rooted in agriculture. In fact, he was the first among his family members to go to college, while chasing his engineering dreams. He was on his way to building his career in the lucrative IT industry when things took an unexpected turn. He realized that contaminated groundwater for irrigation was adversely affecting farmers in his village, including his family. Disturbed by the distress caused to the farming community in his hometown, he decided to take matters in his own hands. He consulted research material and conducted a study, which revealed that industrial effluents from pharmaceutical companies were responsible for the contamination.

Just like Erin Brockovich, he relentlessly spread awareness about the issue in his town. He also complained to the Andhra Pradesh Pollution Control Board, filed an RTI application, and a PIL case, but didn’t receive any favourable response from the authorities. Srikanth says that though he had faith in the system, he realized that his intention and efforts had to be backed by knowledge and technique to approach critically important issues of governance and public policy. The realization brought him to Jindal School of Government and Public Policy (JSGP) to pursue the Masters in Public Policy program. Through different case studies and theories of development, he understood the true impact public policy could have on the lives of individuals.

Srikanth was particularly keen on the field trips and projects he worked on as a student because they helped him understand empirical research. He vividly remembers the Saraswathi River Rejuvenation Project, which involved Policy Analysis Workshops. At the end of the project, he submitted a report not only to JGU but also to government officials in Kurukshetra. One key lesson he learned at JGU is that to bring about a major public policy change for the society, you need to be involved in politics. That’s why he co-founded Social Post Professional Services, which aims to give policy support to people who are involved in the process of policy formulation and implementation.

Since then, Srikanth has worked with several leaders and politicians offering them informed advice to bring about change in their constituencies. His consulting work brought him the attention of an AICC member from Rahul Gandhi’s core team. That’s how his association with INC began. He played a key role in the campaign for Telangana assembly elections and was part of grassroots activities involving research about Gram Sabhas and agriculture, which offered insights to the party campaign. ‘If politicians change their approach, the overall ecosystem would respond favorably,’ he says. From being a local community activist to a political consultant, he is trying his best to bring about that change in the system.