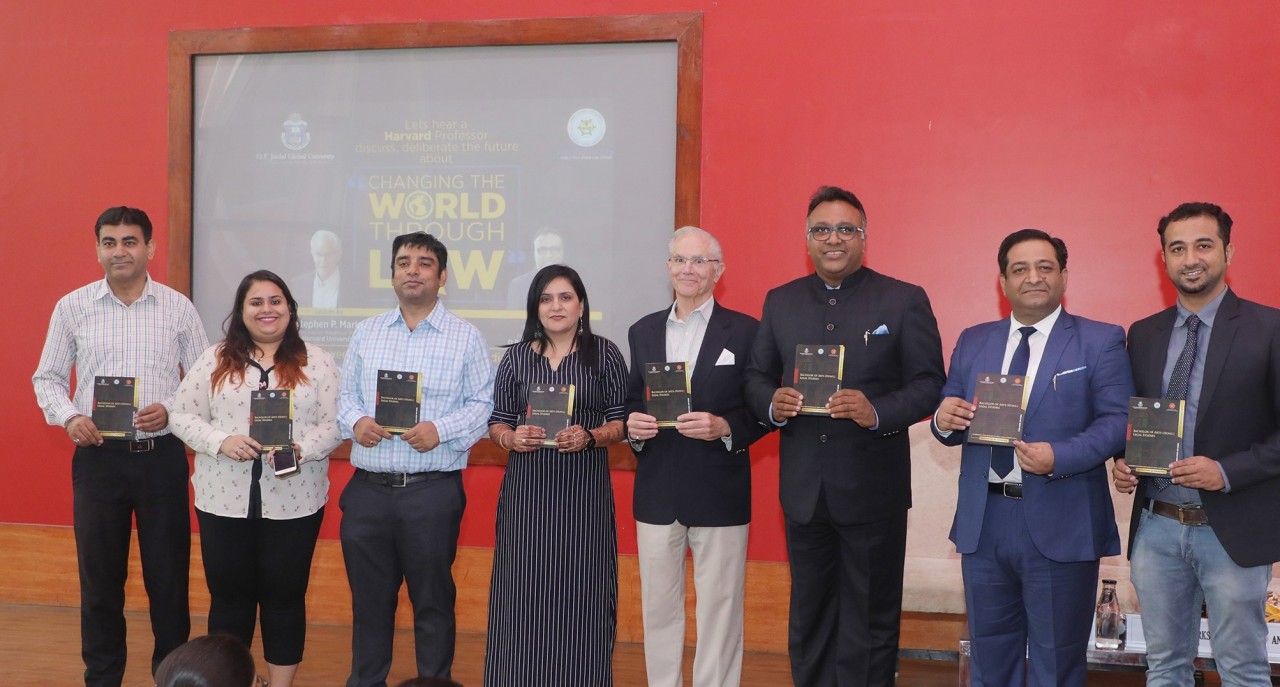 Harvard Professor Inaugurates the B.A. (Hons.) in Legal Studies at Jindal Global Law School with a Public Lecture on “Changing the World Through Law”

The country’s first 3-year B.A. Hons. programme in Legal Studies was launched today at O.P. Jindal Global University (JGU) in Sonipat, Haryana. The programme aims to nurture legal imagination while building a sound understanding of history and organization of legal systems from national, international and comparative perspectives and will be offered by the varsity’s law school. Launching the new BA (Hons.) in Legal Studies Programme, Professor (Dr.) C. Raj Kumar, Founding Vice-Chancellor, JGU and Dean, Jindal Global Law School observed: “This new undergraduate programme in law will fulfil a much needed gap in Indian higher education. It builds on the efforts of the Indian high school education system, which has introduced “Legal Studies” as a course in recent years. This UG degree programme has five objectives:

1.      It has created an opportunity for all high school students to pursue the study of law, even if they may not be interested to become a lawyer. In that sense, it has democratised the study of law and made it accessible to all students regardless of whichever academic stream they have been part of in their high school;

2.     The UG programme in law has provided an opportunity to pursue legal studies even before the study of law so that students can make informed choices as to whether they want to pursue law as a career. After the undergraduate degree in legal studies, they can choose to pursue the three-year LLB, which will empower them to become a lawyer;

3.     The BA Legal Studies programme is interdisciplinary in nature and the curriculum has focussed on the social, economic, and political context of law in society, which will enable the students to understand the nuances dimensions of building a society based on the rule of law and to promote access to justice;

4.      The students of BA Legal Studies being part of the Jindal Global Law School will have the opportunities to experience short term study abroad programmes in law that are held at Harvard University, University of Oxford, Fletcher School-Tufts University and also exchange programmes at many universities around the world including at the University of Arizona;

5.     This programme enables students to have a deep and substantive introduction to legal studies within the context of humanities and social sciences.”

The launch of the first multi-disciplinary undergraduate programme in Legal Studies was preceded by a lecture on ‘Changing the World Through Law’ by Professor Stephen P. Marks, Francois-Xavier Bagnoud Professor of Health and Human Rights, Harvard University and a special address by Professor (Dr.) C. Raj Kumar, Founding Vice-Chancellor, JGU and Dean, Jindal Global Law School.

The B.A. (Hons.) programme in Legal Studies strives to familiarise students with major legal and political discourses, while imparting skills essential for the performance of pre-legal and paralegal works as well as preparing them for careers in law, judiciary, academia, research and public service. Its holistic training seeks to develop, in students, a strong legal and social sciences research foundation. It enables them to express opinions on legal issues concisely and clearly, to identify, analyse and address legal problems and assess the social impact of law. The programme will begin admitting students from the academic year 2020-21.

The notion of rule of law has been deeply embedded in our civilizational heritage, historical context, freedom struggle, and development of our democracy and our institutions. The theme of today’s lecture is how the study of law can prove to be a transformative experience and how through law, you can seek to change the world, noted JGU VC Prof. (Dr.) C Raj Kumar, as he introduced the theme of the lecture.

Articulating on the role of lawyers in the freedom struggle, the Vice Chancellor Prof. Kumar, spoke of lawyers as torchbearers of social transformation and nation building. Lawyers played a central role in the drafting of the Indian Constitution. The Constitution Assembly proceedings clearly demonstrates the part played by the lawyers in elaborating the basic concepts of freedom, equality and justice.

Sharing the journey of Indian independence and the development of democratic institutions, Professor Kumar observed, “Our freedom movement demonstrated that all the leading figures of the Indian national movement, Mahatma Gandhi, Rajendra Prasad, Sardar Vallabhai Patel, Dr. B.R. Ambedkar and many others, including the members of the founding cabinet of Pandit Jawaharlal Nehru, were lawyers. These individuals led the freedom movement from the front and fought colonial rule and injustice, precisely due to their belief in the importance of a rule of law society and their consciousness of the importance of freedom and justice. But they also recognised that law could be an instrument of oppression and hence, it was important to have limits on law and the exercise of power through the Constitution, independent judiciary and other institutions.”

Professor Marks reflected on his own youth and that attracted him to the study of law, eventually earning a B.A. (Law) from Stanford University, and on the role of law in his professional life, not as a typical lawyer in private practice or a law firm but in public service where law figured prominently.

He took pride that he was born in San Francisco, the same city where the United Nations was born and whose Charter that sought to establish the foundations of a new world order and end the scourge of war by protecting human rights and the rule of law for the coming generations. The awareness of this critical role of law led him as a teenager to confront the dilemma of unjust laws that maintained Apartheid in South Africa and racial discrimination in the United States. He observed, “that law could both maintain existing oppression—and should be resisted and disobeyed, as advocated by Mahatma Gandhi, Martin Luther King, Jr., and Nelson Mandela—and be a tool of change”—as he learned by working in Washington for a Senator who played a leading role in the adoption of the Civil Rights and Voting Rights Acts. He went on to complete his legal studies in France at a time of opposition to the war in Vietnam, decolonization, and student insurrections across the globe, which also raised complex issues of the role of law in changing the world.

Professor Marks gave many other examples of the role of law in his early professional career, beginning with his joining the team that founded the International Institute of Human Rights, created by the legendary law professor and judge René Samuel Cassin, with the Nobel Peace Prize he received in 1968 for his role in drafting the Universal Declaration of Human Rights. He went on to a career in the United Nations, where he used law constantly but not in the tradition role of dealing with contracts and disputes in the legal office but rather in promoting the study of international law, contributing to the drafting of international declarations, and managing human rights procedures in UNESCO.

Professor Mark also applied law in several UN peacekeeping operations, working with local leaders and civil society to use law in the transition from war to constitutional democracy. Returning to the United States, Professor Marks continued to apply law for social change in philanthropic work and as an academic in several major universities.

In conclusion, he drew the students’ attention to law’s ambiguous relations to justice as reflecting existing power relations and as a force for social change. He noted that the study of law can prepare you to make lots of money helping those with money protect and expand their wealth, but, more importantly the study of law can also prepare you to be a problem-solver and an agent for positive change in a time of new challenges, such as climate change.

He suggested that a three-year degree in legal studies at Jindal Global Law School is an excellent way to prepare for a life using and understanding the role of law in society for those who have an aptitude for legal reasoning and problem-solving with a vision of making a better world.

The event was attended by over 400 high school students and their teachers and counselors. The Vice Chancellor felicitated the school teachers and ignited the students’ aspirations to become teachers and professors of the future while expressing his concern for Indian society where very few bright people want to take up teaching as a profession.